Happy Easter from ITS!

As we enter this holiday weekend, ITS would like to remind you to beware of malware or phishing scams - especially via email.  It has become quite common for malware and phishing scam campaigns to be launched over holiday weekends to delay detection and remediation by IT staff.  ITS has already seen an increase in communications of phishing or malware scams that ask users to validate account information by clicking on a malicious link or reading a malicious attachment.  Below is a sample malicious message:

Typically, these messages will appear to come from a generic "IT" or "ITS" account.  Often times they will contain poor grammar or generic wording of technical terms (unlikely to mention Manhattan-specific terminology).

If you receive a message that asks you to click an unknown link or suspicious attachment, DO NOT OPEN the link or attachment.  Instead, please verify authenticity with ITS by forwarding the message to ITS@manhattan.edu

Wondering how to protect against malware? Use an adblocker such as uBlock Origin (Firefox or Chrome).

What do ads have to do with malware? Spreading malware through ad networks is called malvertising. No need to pinch your arm. This nightmare is real.

Just this year, many trusted news sites[1][2] allowed malvertising to be offered to browsers running on top of the Windows OS. The result could be a ransomware installation, specifically TeslaCrypt, or a trojan horse installation, named Bedep Trojan, that would allow criminals to use all the infected computers as part of a botnet.

The tool that decides which malware to install is called the Angler Exploit Kit. It is the tool behind many computer crimes. Criminal gangs sell it on the Internet, hopefully you (dear reader) do not know where.

Be mindful of where you go and if random ads should execute on your devices.

Virtual Reality - The future is now

2016 will finally be the year of virtual reality. With the announcement of the Playstation VR’s release date and price yesterday, we finally have the plans of all the three big VR players this year. Oculus VR which is owned by Facebook comes out this month for PC and will cost $599. HTC Vive which is also for the PC will cost $799 and will be available in April. Lastly, the PSVR will be out October 2016 for $399.

These are all primarily built for gaming, but it doesn’t take a stretch of the imagination to see how it can expand education and allow individuals to experience things that they would have never had the chance.

For instance, one project that is coming out of the Virtual Reality space is called the Apollo 11 experience. What is Apollo 11 before we begin? Apollo 11 was part of the Apollo program and the first mission that landed humans on the Moon, Americans Neil Armstrong and Buzz Aldrin, on July 20, 1969. According to Yahoo! News “The ‘Apollo 11 VR Experience’ will feature accurate digital models of the Saturn V rocket, Apollo Command Module and Lunar Lander, including the original real-time audio from the mission and interviews with the astronauts themselves.” [1]

Check out this trailer to see it for yourself
https://www.youtube.com/watch?v=OBzvUYZranc

I, for one, can not wait to experience what it would be like to take a mission to the moon, and mess with all the instruments in the space shuttle, and be on the moon, even if it is virtually. It’s something that 99.99999% of the world will never be able to experience, and if we can experience it virtually, I think that’s pretty incredible.

While that is an example of software created for VR that allows for learning, another possible example is a virtual classroom. Sure, we can have that now with the Internet, but imagine putting on your Virtual Reality headset and actually walking around Manhattan College, walking through the quad. Now, you can sit down in your classroom, and actually look at your virtual classmates, and the teacher. Actually interact, and walk up to the board like you would in class. Stand in front and give a presentation. Imagine having an alumni reunion where people who would not be able to attend under normal circumstances can now meet up with people they haven’t seen in forever in Manhattan College’s virtual quad.

The possibilities for VR are endless. This is only the beginning and the future looks very bright. To learn more about each of the different VR devices you can check out this website: http://www.ign.com/wikis/playstation-4/PlayStation_VR_vs_PC_Oculus_Rift_vs_Vive_Comparison_Chart


Be on the lookout for a mobile version of the Jasper Card!

Slated for released soon after Spring Break, the digital version of one's Jasper Card will be available on IOS smartphones via Apple's native Wallet / Passbook app.  Users with Android devices can view the Jasper Card passbook pass via the recommended Pass2UWallet app.

The card idea was initially proposed and investigated by ITS Student Interns last summer as part of their development of an IOS student app.  The mobile card was then developed separately by the students and ITS staff to function similar to a stand-alone store card.

Stay tuned for more on the impending release.

In September of 2015 ITS began internally testing our next generation VPN solution to replace the outdated installation we have been using for quite some time.

After lengthy testing we have selected and started deploying the industry standard OpenVpn solution on PFSense hardware to the Manhattan College Community. Several factors led us to this decision:


Some members of the community have already been contacted and upgraded to our new VPN, if you have not please send an email to ITS@manhattan.edu and request an upgrade.

The older VPN will no longer be accessible after May 31 2016.

ITS will be conducting network maintenance over spring break which will cause some localized outages across campus. We do this in order to take advantage of a time when there will be no classes and much fewer staff on campus.

We apologize for any inconvenience.

In our continued efforts to optimize processes, we have created a new process for the Faculty Laptop Initiative (FLI) using the Banner Workflow system.

Banner Workflow is a tool that has enabled us to automate and make electronic processes that in the past were more paper intensive.  If you have a process that you would like to try to automate, please reach out to ITS via its@manhattan.edu to schedule a meeting with an ITS Banner Workflow consultant.

The new FLI process has two parts.  The first part lives in Banner Workflow via Self-Service.  This is where the Dean sets eligibility, the Faculty make their selections, and the Dean approves selections. Deans and Faculty will be able to track progress via Self-Service as well.

The second part lives in our TeamDynamix ticketing system.  Here, the Faculty member will be able to track progress from order, through preparation, to delivery.

As you can see, the new process is much more transparent and informative.  If you are an eligible Faculty member, keep an eye on your email.  The system will send an automated email indicating that you are eligible with a link to the request form.

For more information about the FLI, click here.
Posted by Richard Musal at 4:08 PM

In an effort to optimize resources we have decided to close the Client Services Office on Fridays at 7PM. You can see the updated Hours of Operation here.
Posted by Richard Musal at 2:03 PM

Login Now to See Your Tickets 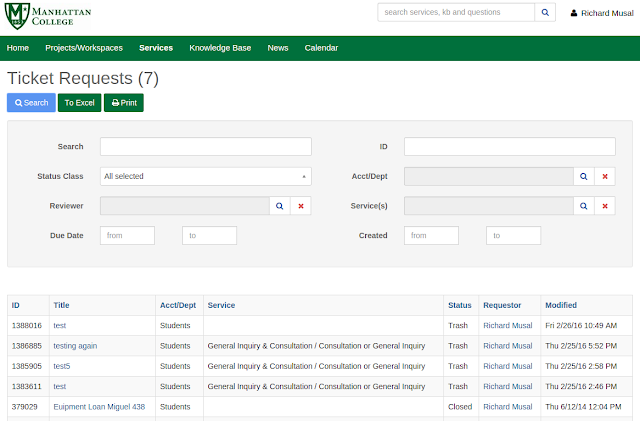 Posted by Richard Musal at 9:00 AM

ITS is aware of an internet outage affecting the Kelly Commons building.

We have had technicians on site since approximately 8am and we are troubleshooting a possible hardware failure.

Please spread the word.  ITS is looking for an IT Support Specialist (Training).  See posting here.
Posted by Richard Musal at 6:25 PM

Email ThisBlogThis!Share to TwitterShare to FacebookShare to Pinterest
Labels: ITS, Job, Manhattan College

In our continued effort to optimize our processes we are changing our internal ticketing process.  We do not foresee this change impacting users, but we want to make you aware so that you bear with us should there be issues.  The change should be implemented within the next couple of weeks.  Should you experience any issues please #tellITS.
Posted by Richard Musal at 5:28 PM