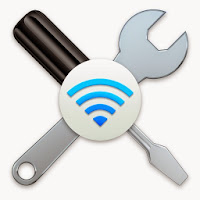 ITS is currently working to update a configuration in Overlook to resolve an issue affecting wired and wireless connectivity.  Residents of Overlook may experience intermittent interruptions to service as updates are applied.  We expect interruptions in service to be completed prior to 6:00PM.

ITS will be updating WIFI coverage in Horan Hall on Monday 10/19.  Additional coverage will be added to each floor.  Residents of Horan may experience brief interruptions to WIFI service as additional capacity is also added to networks that connect Horan WIFI.

Global Handwashing Day is an internationally celebrated day to promote good hygiene through handwashing with soap. At Manhattan College, we are doing our part to extend the concepts of Global Handwashing Day and apply them to the ways that we operate in ITS and handle electronic devices and computers.  One way that we are promoting good hygiene is by providing hand sanitizer dispenser in all campus computer labs.  Personal computer keyboards, mice, and cell phones can be a hotbed for germs as well.  Besides disinfecting these surfaces between uses, handwashing before and after use can significantly reduce the spread of germs when using these devices. For information on cleaning your electronic devices:  http://www.cleaninginstitute.org/assets/1/Page/Computer%20Cleaning.pdf

JasperNet users access the new JasperNet SignOn page may experience intermittent interruptions during periods of peak utilization while we continue to tune the new system.  ITS has been made aware that some users experienced a temporary error on Tuesday during peak periods of usage.  In the case that you receive an error accessing the new SignOn page, please refresh the page until a permanent solution is implemented.   This issue does not affect JasperNet users AFTER they have successfully signed in to the new page.  Thank you for your patience as we fine-tune this new enhancement.

Update:
ITS has identified the cause of the issue.  We have moved Banner services (INB, SSB, and Workflow) back to the "old" login page as a temporary measure to avoid further interruptions.  A fix has been deployed and is currently being tested.  We hope to move Banner services back to the new login page the week of 10/19.
Posted by Jake at 6:59 AM

You may have noticed that the JasperNet SignOn page looked different this morning.  That's because a major update to the JasperNet SSO (Single SignOn) system was implemented over the weekend. 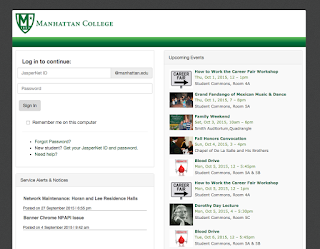 The updates applied to the JasperNet SignOn page are part of an effort to raise awareness of phishing attacks and provide JasperNet users a more secure way to access their accounts.

Over the course of the coming weeks, you will see more information about the updates applied to the new signon page and ways to keep you account information safe - including only providing your JasperNet username and password when you see the green Manhattan College bar in the URL #GreenMeansGo .

For more information about the upgrade, please see the project page on ITSBlog:
http://itsblog.manhattan.edu/p/jaspernet-sso.html

The JasperNet Signin page will receive a major update Sunday evening 10/11/2015.  After the update, JasperNet users will be presented with new signin page with the following updates:

Possibly the most important aspect of the update is that the new login system will be hosted on a site providing "Extended Validation" to web browsers - which means a more secure experience for you....  After the upgrade, look for the green "Manhattan College" in the address bar to know that you are entering your JasperNet username and password on a secure site.

The updaated page also comes with a new format that has been streamlined for mobile browsers and includes more information anout important campus events.  The login box has been optimized to include helpful inforamtion when accessing your account.  In addtion, a new events column has been added to the right side of the page to highlight major campus events.

There is currently an outage of the Google Drive System.  Google is aware of the outage.  When the issue is resolved, it will be listed on the Google Apps Dashboard.

Remember that should you ever notice an issue with a Google service, you can check the status of that service at the Google Apps Dashboard.

This outage is affecting Google Drive, Docs, Sheets, and Slides.

ITS is will be performing network maintenance in Overlook Manor on Friday 10/9.  The first part of the maintenance will take place from 6:00AM-7:00AM.  During this time wired and wireless services will be OFFLINE for an extended duration while new network hardware is installed.

For the remainder of the day (7:00AM-3:00PM), ITS will be working to upgrade connectivity to each room in preparation for a wide-spread WIFI upgrade over the next few weeks.  During this time residents of Overlook may experience very brief interruptions to wired and wireless network connectivity.

For the remainder of the day, residents of Overlook Manor may experience brief interruptions until 3:00PM while network ports are upgraded.  Residents can also expect to see ITS STARS throughout the building upgrading WIFI hotspots.
Posted by Jake at 8:32 PM

The JasperNet SignOn page will be updated the week of 10/12 and will receive a new name - https://secure.manhattan.edu

Accompanying the new name is a new way to identify the JasperNet SignOn page as a secure site to provide your password.  The new site will take advantage of "Extended Validation" (EV) SSL certificate technology.  By using an EV certificate, secure.manhattan.edu will turn the URL bar of your browser green and display the name "Manhattan College".

EV trusted sites will display a green section in the address bar that may look slightly different on different browsers, but always look for the green "lock" icon.  #GreenMeansGo

Going forward, ITS will be working to move ALL JasperNet services to the new #GreenMeansGo login page on secure.manhattan.edu.  ALL sites that ask for your JasperNet password will eventually be moved to the new login page.

Changes are coming to the JasperNet Single Signon (SSO) page.  The first thing that users will notice is a more streamlined design that will now include a preview of featured campus events as well as important notifications.  In addition to the new design, a number of underlying security enhancements will be included to help prevent "phishing" attempts and provide a more secure experience. 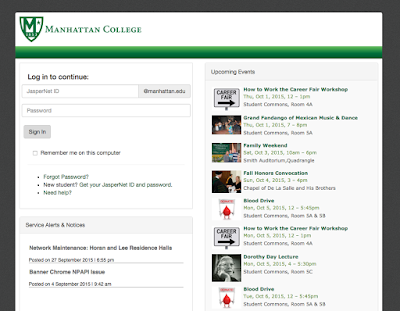 Updates will be rolled out gradually throughout the week of 10/12.  As a result, you may see both the old and the new login page while we transition JasperNet services from the old page to the new page.

If you've accessed any of our TEST environments since August,  you've already been using the new page!

Be on the lookout for additional announcements in the coming days!!

Note that fully completed forms are required for any change to the labs, even for free software.  All software media and licenses are also required by the due date.

Requests should be submitted by Friday November 13th.  Software for forms submitted after the deadline may not be installed in the labs for the Spring 2016 semester. This is because we need time to install, test and deploy the software before classes start.
Posted by Richard Musal at 3:37 PM

ITS has received numerous reports from owners of Apple products related to WIFI issues since the beginning of the semester.  Reports have consistently included issues accessing JASPERNET WIFI from an Apple device running recent versions of OSX including Yosemite.  Apple devices were not able to connect although other devices were functioning properly in the same location.  Apple devices would show the WIFI symbol with an exclamation point.

The issue that has been identified has been confirmed with multiple wireless vendors as a known issue with recent versions of OSX - most notably Yosemite.  The issue occurs most frequently when Apple devices roam from a 2.4GHz WIFI hotspot to a 5GHz WIFI hotspot.  While there are benefits of operating overlapping 2.4GHz and 5GHz networks, ITS has opted to temporarily discontinue the use of the 5GHz WIFI spectrum until a confirmed fixed is released from Apple.

We welcome your feedback related to this issue:  #TellITS
http://www.manhattan.edu/tellits

A network update performed on 10/1/2015 has increased the amount of bandwidth available to JasperNet users from 1Gbps to up to 2Gbps.  This is the first phase of an upgrade that is expected to be completed later this month that will expand connectivity even more.

When students returned to campus for the fall semester, ITS observed an unprecedented demand for network resources - especially rich media content such as streaming video from YouTube and Netflix.  The increased demand resulted was slower-than-normal download speeds and videos that sometimes buffered.  With the recent and planned upgrades in October, ITS will deliver significantly more capacity to support the increased demand for network connectivity from faculty and students.

Below is a network traffic chart showing 100% utilization throughout most of the day, then the utilization after capacity was increased:

The graph shows network utilization at our Internet Service Provider's connection point.  The connection previously operated at maximum capacity from approximately 10AM-2AM since the beginning of the semester.  The peaks at the right of the graph show the time that the additional capacity was added.  Enjoy! 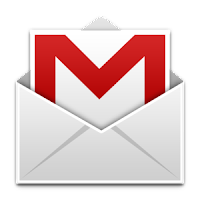 If you continue to experience issues receiving email, please contact ITS Client Services at x7973 or its@manhattan.edu #TellITS